HISTORY OF PARSON OF THE HILLS,
CAMP JOY, AND VALLEY HAVEN CAMP & RETREAT 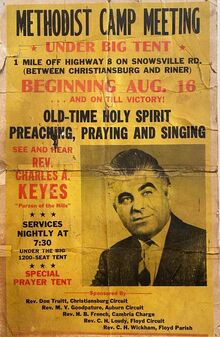 Parson of the Hills
Rev. Charles Keyes became an evangelist as a young child. By the time he passed, he was known widely throughout the region, state and beyond as the "Parson of the Hills." His was widely known for the passionate tent revivals where he shared the good news of the Gospel of Jesus Christ. The Parson established Parson of the Hills Foundation in 1960 to minister to the less fortunate. The ministry distributed truckloads of items such as toys, blankets, food, and clothes, to needy areas in several states.

​In the early years of Parson of the Hills ministries, Charles Keyes had a clear vision to minister to the Appalachian Mountain population. He had compassion on their poverty and need for the Gospel. He held tent meetings and visited their communities on a regular basis. Despite government aid, Mr. Keyes was the only Santa Claus many hill dwellers ever knew. He would begin his travels in early December and would not finish until March.

Rev. Keyes established Camp Joy in 1971 as a place where the children he met in the Appalachian Mountains could come free of charge to learn the gospel and enjoy a week of pure fun!  As Rev. Keyes began the weeks of free camp one little boy was so blessed he said, "this is joy... Camp Joy!" Thousands of children were ministered to throughout the years of Camp Joy's existence. 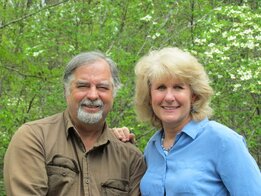 Valley Haven
During the 80's, the Parson had several strokes and his son, David Keyes, became the Executive Director of the Parson of the Hills Foundation. The Parson, Charles Keyes, later died in March 17, 1996 at the age of 77.

David's desire was to continue the ministry that his father, the Parson, had begun. This included maintaining Camp Joy and the Christmas ministry. David also had a passion to establish a year round Christian Retreat Center. This vision came into place with the establishment of Valley Haven Camp and Retreat Center in 1989 on the current camp property in southern Catawba County, NC. When David began construction at Valley Haven, it was comprised of cornfields and trees. Utilizing his passion and gifting in building and construction, David shaped the camp and retreat center over the years, building a number of facilities for groups to rest and enjoy community while on retreat together.

David was joined in these efforts by his wife, Finley Keyes. Finley started working at Camp Joy as a CIT when she was 15 years old. She later married David and became a nurse. Finley's lifelong love of children and nursing made her irreplaceable at Camp Joy where she served as the camp nurse for over 40 years! Finley's heart for serving Jesus, making children feel loved, and fun-filled laughter have made an incredible impact on the local community.

Together with his wife Finley Keyes, David continued the Christmas ministries and Camp Joy for a multitude of years. Under David's stewardship, and Valley Haven also became a place of rest and encouragement for hundreds of churches and thousands of believers in and surrounding the Catawba Valley area. 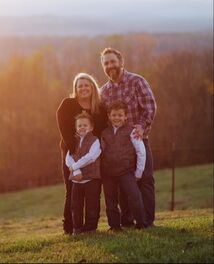 Current
In 2015, Nate and Joni Keyes Horne moved to Hickory to begin serving at Valley Haven Camp and Retreat Center. Joni Keyes Horne grew up watching the ministries of both her grandfather (the Parson) and David (her father). Serving at the camp had been a lifelong desire of hers and the perfect place for her to serve Jesus using her passions for hospitality and sharing the love and joy of Jesus with children and families.

Prior to coming to Valley Haven, Nate had earned his MDiv at Gordon Conwell and served as a youth pastor in Charlotte, NC. He also managed a property rental company during that time. Serving at Valley Haven was the perfect blend of all that the Lord had lead the Horne family through up until that time. In 2018, Nate became the Executive Director at Valley Haven where Joni also serves as the Director of Accounting and Hospitality.

​Together, with their boys Zach and Jon, Nate and Joni desire to continue the ministry of the Gospel to those in and around the Catawba Valley region through Valley Haven Summer Camps. These summer camps are a continuation of the Camp Joy ministry that had begun decades earlier in an effort to serve the under-served that they might hear and grow in the good news of the Gospel. The Horne's also love serving the local church through retreats and conferences held at Valley Haven. ​